Explore Your Backyard started three years ago as the brainchild of the popular chia seed based energy bar company, Runivore, and ultramarathon race organizer Taiwan Beast Runners. The issue in Taiwan is not the lack of gorgeous trails to run on, but the abundance. 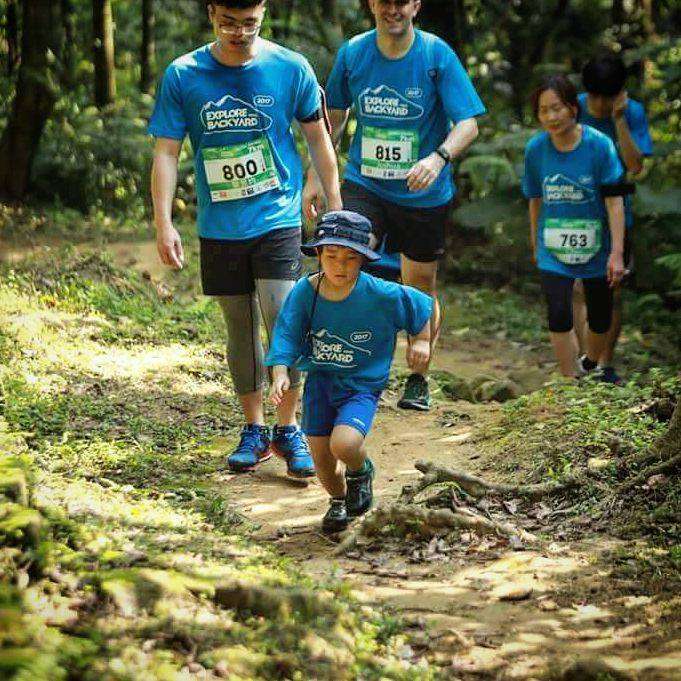 Despite my two years of running trails here in Taipei, I can get lost on pristine paths and jagged mountain ranges for hours without recognizing a single step of the trails. This is great for those runners like us whose idea of a good time is waking up at 4 am, drinking from streams and clawing their way through thick jungle armed with running shoes, a hydration pack and a GPX file. But what about the athletes who flood the riverside running paths late at night, or hikers who aren’t so familiar with the spiderwebs of trails nearby? This is the thought Tom and Petr had when they designed Explore Your Backyard. It showcases a hefty 16k option with a lot of climbing, a middle distance of around 10-12k and a hiking option of 7k or less, all right in your backyard.
In the spirit of exploration, Explore Your Backyard has no set yearly course and moves every year to take participants on a tour of the hidden gems on the outskirts of the city. All of the trails are accessible by a quick ride on the MRT, but are always held on trails. Last year was in the Neihu area, north-east of the city, and the 2015 edition was in the historic tea district of Maokong.
Last year I thought I fared pretty well. I started strong and led much of the 16k race before joining a battle against local running legend Chen, who would overtake me on the last climb leading to the finish, coming in first just barely ahead of me.

This year, despite some recent big races and big injuries, I had to return. Only this year, it wasn’t just Chen toeing the line with me. More than a handful of strong runners arrived, all of which would have been nominated the clear winner, had the others not signed up. The 400+ participants across the 3 groups started next to the massive staircase of the 大暖坑 Temple.

As the microphone failed during the countdown, the runners sang the chorus of 5, 4, 3, 2, 1… and we dropped down from the temple toward the city to 0 meters elevation before turning and immediately high-tailing back up into the mountains in a 2 km stretch of climbing over rough volcanic rocks that required ropes for support. Hopefully, this was a good hint of what kind of race we were in store for.

I started ahead but ran and climbed conservatively knowing the peaks still in store for us. After our short drop between two and three km, we were back to the air-sucking hands-on-knees climbing to 300 meters up. Some of the other runners went screaming up these hills, but I thought I knew better and tried to keep a rhythm to keep my heart rate down and conserve energy. I let runners pass and fell back to 9th place.

I have run this course before. It’s literally my back yard. They should have called it Explore Cory’s Backyard. Two weeks ago I gave it a solid start-to-finish shot, running a 2:43, and I had well marked out what times I should be hitting which places. Despite being way ahead of schedule and reaching the top of the climb at 5k more than 5 minutes faster than my target race-day time, I was told I’m still 5 minutes behind the two leaders, Chou Pin Chi and his friend, Wu Youjia. I’d later learn that despite their age, the two of them are solid 2:20 marathoners.

Chou leads the way, with Jerry trying to hold on.

Still, I pushed, and when I reached the aid station leading to the Loop Of Happiness and was told I’m 6-7 minutes behind the leaders, I was optimistic about my skills as an endurance athlete and felt like I was still following my race plan well.

And I was, but the gods of trail racing laugh at your silly “plans.” This isn’t a road race. Things happen. Fellow Runivore athlete and good friend of mine, Randall, fell victim to serious stomach issues and dropped behind. Andrey succumbed to the heat (I should mention that we had the sun and a record high temperature for the year) and was sidelined with back cramps. Me? My IT band made a comeback tour, the unwelcome likes have not been seen since Ozzy Osborne.

Inside the Loop Of Happiness, I was able to overtake 3 runners on the mountain road leading to the Stairway To Heaven (I call it this because it’s a straight up climb from the road to 天上山 – or “Heaven Mountain,”) and then passed one more runner on the climb itself. I was in my steady rhythm and was starting to have a lot of fun. I reached the peak platform in 4th. It’s a sentimental peak for me, as I use it as my training. I train so much on it that I can tell you that it takes 54 minutes to reach the peak from my front door if you include one other peak nearby.

My hometown luck was in full swing and I was ready for my crack at the leaders. But that’s the thing about swings: they go up, and they go down. On the downhill technical bit leading from the platform, my IT band started to ache. Then pulse… and shock and cramp. I felt one of the runners, Jerry, approaching me from behind and I tried to kick it into a faster gear, but the shocks of pain were a giant red flag telling me I need to stop.

I pulled over and let him pass, then hobbled for a while. Then stopped, tried stretching it and rolling it around holding onto a tree, while silence on the trail washed over me. Hearing silence at a race is a scary thing, and I needed to get moving again, whether it’s to the finish or to the medics. I knew I had a half km to finish The Loop Of Happiness where there’s a nice bus that would take me back to lay down and ice it. So I hobbled. It popped and cracked. I hobbled faster. And by the time I reached the aid station, it started stretching back out. This is when my watch beeped and flashed ’10k,’ I saw a flash of color from the shirt of the guy who just passed me, and stupid brain said: “hey, you can totally finish this race.”

I hobbled the downhills and climbed the uphills, all the while trying to put my weight on the right leg, but most of these ridgelines are seriously technical and require some fancy footwork to navigate. By the time I reached the course peak at 500m high, I felt like I could get into a rhythm that wasn’t hurting my knee, and the pain seemed to subside.

Then the beauty of the trail set in again. Massive climbs that resemble my old bouldering gym followed by long stretches of squishy and runnable trail under the shade of bamboo and Asian pine trees. On a hot day like this, the shade of the forest is very welcome.

I was worried about a traffic jam of the 10k runners being ahead of us, but most stretches were devoid of humanity except a few of the faster 10k runners. It’s always nice seeing people on a run who you’re not competing with. We chatted and I gave some tips about the course as well as some high-fives.

Before I knew it, we were making the turn back into the venue. I checked my watch to see we only had 1 km to go. I was genuinely sad that we were almost finished. And then I got another shock of pain from my knee up to my outer hip and decided I’m not so sad after all. By the time I reached the last downhill, the sound of the music coming from the venue was loud enough to distract me from my race－day woes.

One more solid climb up the back of the temple, then I rolled back into the finish to a crowd of applause.

Pictured, Pippin, the winner of the 10k group.

Waiting at the finish was Chou Pin Chi and his friend Wu. Chou tells me that his friend overtook him on the last climb and ran in to win at 2:00 flat. Which is just ridiculous. My target time for a good race was 2:20. Somehow despite my little break-time and downhill care for my knee, I came in at 2:16 and 5th place. This guy is 50, by the way.

The eventual winner, Wu. Not even wearing trail running shoes.

We cheered on runners as they made the skydive from the temple and into the finish and donned their “I’m a Runivore Badass” medals. I chowed down on Oh Cha Cha’s vegan cuisine and drinking craft beer from Anchor Brewing Company while I alternated ice cold beer between my knee and my mouth.

Runners, hikers, grandparents and children wandered in with smiles on their faces having accomplished circumventing one of the most brutal and beautiful landscapes on Earth, sitting right here in their own Backyard.

But don’t you think for a second that when I come back next year it will be as easy to put me in 5th place.

PrevPreviousExplore Your Backyard 3.0 – Food and Drinks
Next8 Reasons Why 2020 XTERRA Taiwan is a Must-GoNext