Today, we’re talking with Ross Roessler, an ultra runner based out of Japan. We first met Ross when he spent a few years based in Taiwan where he immediately ingrained himself with the local running community. He joined a few of our Tuesday night LSD runs.

We recently had a chance to catch up with Ross again, this time he returned to Taiwan to conquer the Formosa Trail 104km race. (Perhaps the toughest and most beautiful ultra in Taiwan). While he was here we learned that he actually has a secret race nutrition weapon. The following email interview grills him about the race and his home-made energy gels. 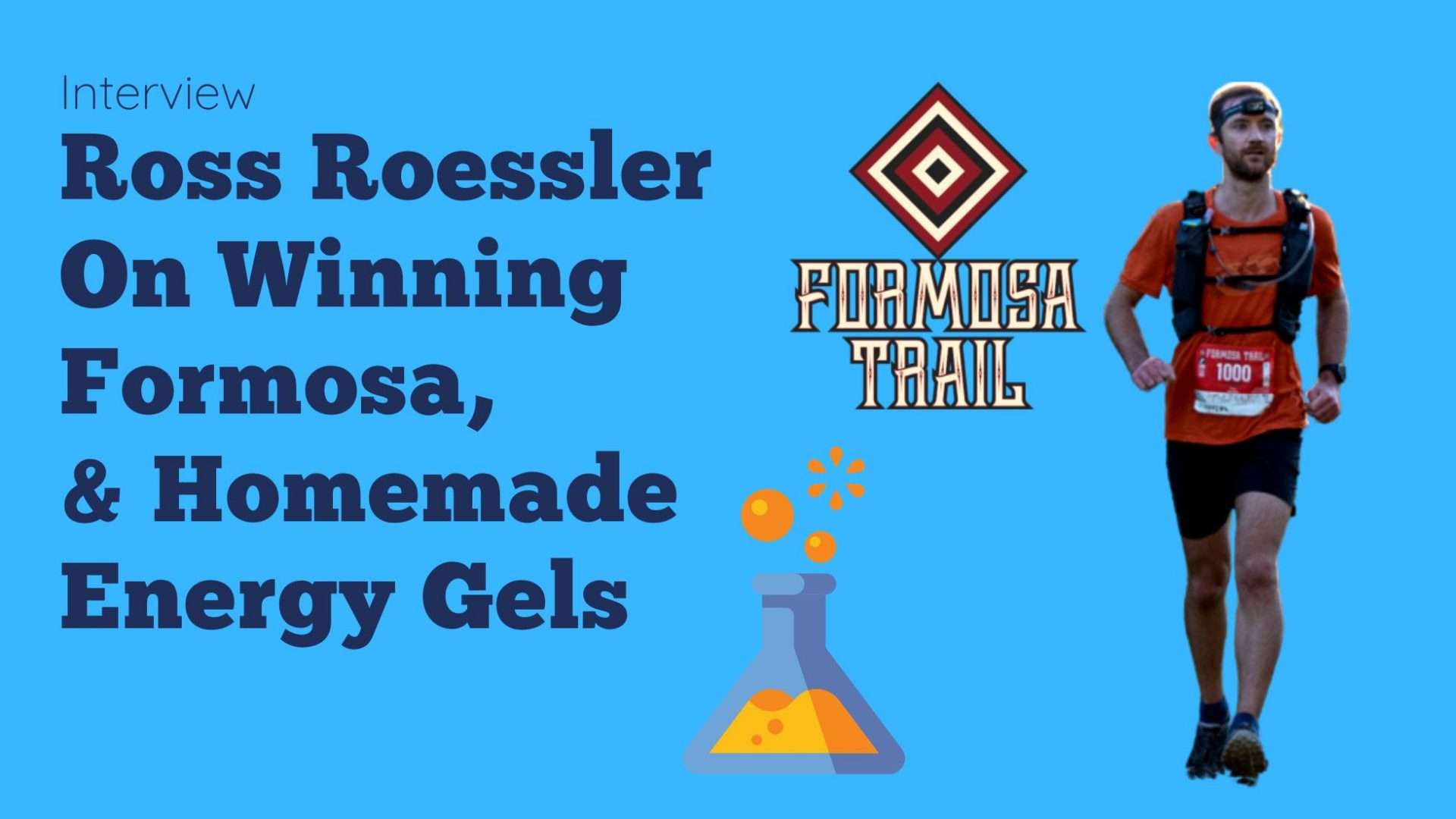 Q. Hi Ross, it was great to see you visiting Taiwan and congrats on winning the Formosa Trail 104 km race. It was a very impressive performance – given the warmer than usual weather. Tell us a little bit about the experience.

Hey Tom, thanks for the interview. I really appreciate it- it helped me relive the race 🙂

The race was fantastic, it was actually my first 100km and I really enjoyed it. The course was well marked, a variety of terrain, and quite runnable; I think a great course for one’s first 100km. It was more road than I wanted- I really love trails- but that made it more runnable and also less tiring, so there’s a balance. It’s also a great venue out in Puli by the lake. I’d definitely recommend it. My first trail race ever was the Formosa 40km two years ago, and as a result of that I’m now happily addicted to trail running. I truly think Taiwan is a hidden gem for trail running, actually for outdoor sports in general.

Two things that went well in the Formosa 104: I paced well; I started slow and chatted with friends for the first climb. And I ran with a smile pretty much the whole race.

Two things to improve: I slowed down massively on the very last climb in the dark; my mind did not feel the need to keep moving. And I struggled with nutrition, I basically couldn’t eat or drink anything for the last 3 hours.

Not really. I think running is just more popular in Japan, law of averages.

But it’s true Japan has such an incredible public transit system, you can go almost anywhere by train and bus, run as far as you want in the mountains, and take a totally different train back home. That’s amazing, and how I spend all my weekends. So I do think trail running is quite accessible here.

Tips for runners from abroad- Taiwan is so hot!!! Get ready! And practice technical trails, for sure.

For the heat, I recently read a book called Endure by Alex Hutchinson that I really enjoyed. One of the proven strategies for coping with heat is to tell yourself “I’m doing great, I can handle this.” It’s a bit of a placebo that works, it’s about convincing your mind that you’re doing well and should continue. (I should note that this alone is likely not enough, you also want to practice running in hot conditions which is a… more reliable way of convincing your mind that you can handle it, as well as triggering some physical adaptations.) Anyway, I’ve always been quite heat tolerant, and I love the sun, so even though coming from Japan I wasn’t used to the heat, I talked to myself and told myself I was totally fine, and I think it helped.

Q. Now for the reason we really reached out to you. We heard that you are not just a runner, but a runner that makes his own energy gels. Can you confirm or deny this report and tell us how you got started making your own sports nutrition products.

Confirmed! Though I’m not sure if they are a “secret race nutrition weapon”. I also made them for two friends running the 104 and one finished mid-pack and the other dropped out, so the jury’s still out on how effective they are! Though both friends did say they were delicious and very helpful.

I love cooking and baking and I love making things from scratch, as it’s often cheaper, healthier, and tastier. I’ve made my own ice cream, bread, yogurt, protein bars, and much more. Energy gels are fairly expensive (though in fairness, maybe it goes into R&D) and really hard to get in Japan, so they were a natural candidate to make myself.

If you’re curious, out of the above, I got the most into making ice cream and had a blog at one point. Making your own ice cream is actually more expensive than buying it at the store (cream is expensive), but it is so delicious, and you can have so much fun with the flavors. Tiramisu was one of my favorites.

Q. Are there any branded products that you like to use? Ones that perhaps inspired you to create your own home-made gels?

I’ve only had a total of 8 store bought gels, I just don’t want to pay $2-3 USD for one gel, races are expensive enough 🙂 But I have tried both Gu Roctane and Hammer gels and liked them both a lot. I think they’re fun and tasty. The Hammer Apple Cinnamon was my favorite flavor, it tasted just like apple pie.

Other than gels, the biggest branded product I use is Nuun Hydration Tablets. I think they’re delicious and help my recovery, though it’s likely at least partially the placebo effect. I actually love putting them in boiled water and having a hot citrus-flavor drink. I haven’t tried making my own hydration salts yet, maybe I should.

Q. What are some advantages of making your own gels and are there any disadvantages?

The main advantage is the price, I bought ingredients on Amazon and it cost less than 20 cents (USD) per gel. What’s extra nice about this is now I don’t need to feel guilty if I eat 20+ during a race. Another advantage, of course, is control over the flavor. I haven’t had much of a chance yet, but I’m looking forward to experimenting with different flavors, with and without caffeine, etc.

The biggest disadvantage is packaging. Sports gels come in nice convenient 100 calorie packages. This is easier to regulate and track. For a race, I make the equivalent of 16 gels and put them in a 500 mL soft flask. It’s harder to track how much you’re consuming, I personally just go by feel. And if I don’t finish the flask I just dump it out, I don’t know if it’s possible to save it, so you have to make the gels fresh before each race.

Q. Do you mind sharing your favorite recipe and process with other runners?

For sure! It literally takes 5 minutes if you have a kitchen scale.

Steps to make your own energy gel:

This recipe follows the formula that leading energy gel companies are using. Basically, the current science indicates that the average person can absorb 60 grams per hour of glucose, and an additional 30 grams per hour of fructose, which is absorbed via a different pathway.

It’s very important to use maltose because your body can absorb it with quite little water, whereas glucose requires a lot more water to absorb, more than you’d be able consume during a race if you’re eating a lot of gels. And definitely don’t substitute with honey (which is a mix of fructose, glucose, and water) or anything like that.

Confession/Disclaimer: This is my understanding from reading various blogs, but I haven’t actually read any scientific papers on it. This website from an energy gel company provides a good overview and cites numerous papers, but the company itself might be biased. On the other hand, there is currently some research exploring consuming above 90 grams of carbs per hour.

The fact that all the energy gel companies I personally know of follow the above formula convinces me that this is the best option we know of today. However, science is always evolving, as is marketing, and I would guess the products will look somewhat different in 20 years.

Notes on Flavor: I accidentally bought Blue Raspberry flavored amino acids, so all my energy gels taste like blue raspberry. Once, I omitted the BCAAs and lemon juice, and instead added 8 grams of cocoa powder and about 3 grams of instant coffee, and it tasted incredible.

During the Formosa 104, I ate solid food for about the first 2 hours, but after that I subsisted entirely on fruit at the aid stations and about 20 homemade gels. In hindsight, I should have tried to eat solid food for longer, and I also need to practice eating while running.

Q. Do you ever foresee making and selling a product for runners? Why or why not?

I’ve never thought about it. Probably not, because I don’t know anything about manufacturing. Though I love ice cream, maybe I can develop an ice-cream like product that doesn’t melt that I could eat while running.

I have been considering trying to start a trail running company like Beast Runners that organizes races. I’ve spoken with a few founders, and it sounds amazing. It would be a wonderful way to encourage people to run and explore different areas. Of course, I’m aware that it’s really mostly logistics and planning, which I’m good at and enjoy, and marketing, which I’m bad at and don’t enjoy.

Q. Thanks for sharing, before we let you go, let us know about what is next on the running schedule, and how runners can follow your adventures.

No races booked at the moment. My training goal for next year is speed, so I’d like to focus on the VK and “shorter” races around 40 km. There’s a VK Skyrunning series in Japan, but they haven’t announced the 2023 dates yet.