Before we get to the review, I’d like to provide the basics on hydration and why electrolytes are critical.

Hydration is a massive part of race fueling. Two key factors – water intake and electrolyte balance – contribute to how well you stay hydrated and power an assortment of bodily functions critical to athletic performance.

Here are links to two in-depth articles on the importance of electrolytes, particularly sodium and potassium. But here’s the gist.

Remember some junior high biology? The human body is 70% water. One essential function of all the liquids is to help transport oxygen and nutrients into the cells that maintain life. It’s not just plain water; it consists of many things, one of which is electrolytes. The six main electrolytes are sodium, potassium, chloride, calcium, phosphate, and magnesium.

Electrolytes, when dissolved in the blood, produce an electrical charge and become ions. They then become enablers of critical functions in our body, such as electrical signaling, muscle contraction, sending nerve impulses, managing the body fluids via osmosis, and regulating the blood’s acid-base balance.

When we exercise, we sweat. For example, we sweat between 400-2,400ml per hour when we run, depending on the athlete, intensity, and climate. Per 100ml of sweat, we lose, on average, about: 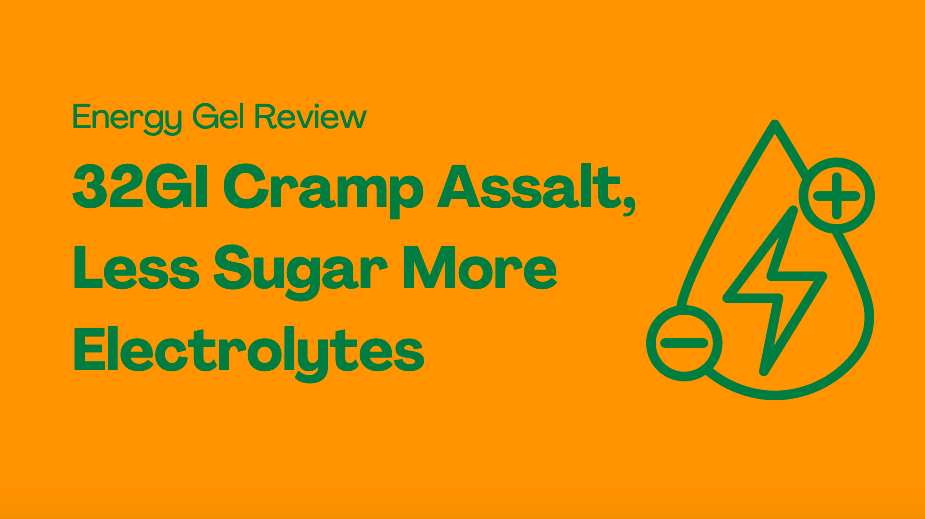 As a former marketing executive, I’ve attended my fair share of product naming meetings. I have to say I love the name, “Cramp Assalt.”

Capsicum annum is a plant species that includes bell peppers and some chili pepper varieties such as jalapeños, New Mexico chili, and cayenne peppers. Most hydration products aim to prevent cramps. 32GI Cramp Assalt doesn’t just aim to prevent, it also claims to provide a “trigger” that can put a stop to cramps after they occur.

According to WebMD, glutamine supplements might benefit gut and immune functions. The amino acid glutamine is needed to synthesize proteins in the body and aids the production of other amino acids and glucose. 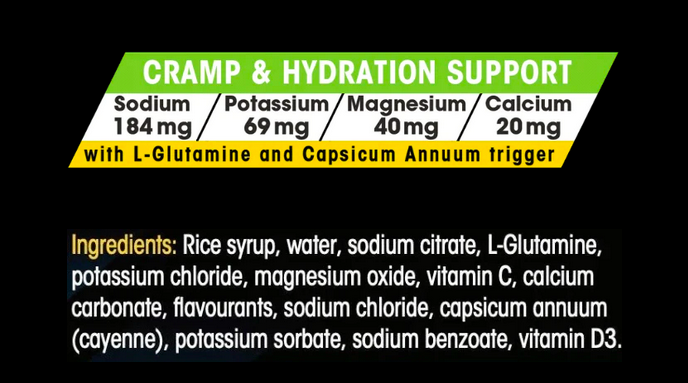 Certainly not a lot of carbohydrates, but the main benefit of the gel is not carbohydrate replenishment. It’s the ample electrolytes and other micro-nutrients that also play a role in endurance athletics.

32GI Cramp Assalt comes in one flavor, Sea Salt Caramel. It has a syrupy texture (not too thick) and a strange flavor – I would describe it as medicine-like salty sweet.

I’m not a fan of the taste. But thank god it’s only 10g of concentrated liquid, so it’s tolerable in small quantities.

32GI packaging always gets an A plus plus from me. The patented design requires only one hand to snap open and consume.

The Cramp Assalt gel is smaller than a business card and flat. Super easy to bring along.

However, an accident happened this time. I had the gels in the front pocket slots of my shorts. I took a knee to tie my shoe and accidentally snapped open the gel. There was slight leakage, but not disastrous.

When carrying the gel, make sure it’s kept flat. 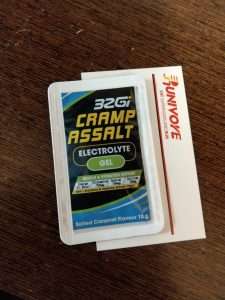 I tested 32GI Cramp Assalt Electrolyte Gel during a 15km workout (3km moderate effort + 2km threshold effort x 3). I tagged on a 2km warm-up before and a 6km cool-down jog at the end for a total of 23km.

I brought two gels and took one after the first and third sets of the workout. I also had 500ml of water in a flask and several drinking fountains are available along the route. I ate a carbohydrate-rich breakfast of oats, honey, and blueberries, so I was topped off for the workout.

The entire run lasted 2 hours, and the temperature was around 20-22 degree Celsius.

While it’s difficult to verify the benefits of capsicum annum and glutamine as ingredients, I had a positive experience with 32GI Cramp Assalt.

As I learn more about fueling and continue to fine-tune what works for me, I’m beginning to appreciate more specific options. It’s not a bad idea to separate electrolytes and carbohydrates, particularly for training. This is likely a good option for fat-as-fuel athletes that don’t require as much carbohydrate to perform but still want a little sugar kick on hard runs and race day.

When I’m not testing energy gels, I prefer just eating a hearty breakfast for my longer runs and workouts. An option that helps with hydration but doesn’t require me to gulp down 30-40g of sugary, syrupy liquid has its place in the endurance sports fueling spectrum.

Looking for more energy gel recommendations? Here are a few energy gels reviewed by us recently.