The South Africa-based 32GI first came to prominence with its low glycemic philosophy for replenishing carbohydrates. Over the years, the company’s portfolio expanded to include products for pre-workout, during races, hydration-specific, and everyday nutrition.

32GI’s energy gels fall under its “Race” series, which uses faster releasing simple sugars as ingredients and work similarly like conventional gels. The “lower and steadier rise in blood sugar” concept is still alive and well in the “Endure” series in the forms of sports drinks and energy chews.

So for this review, I tried both 32GI’s energy gels and energy chews to provide a more complete picture of the company’s products. 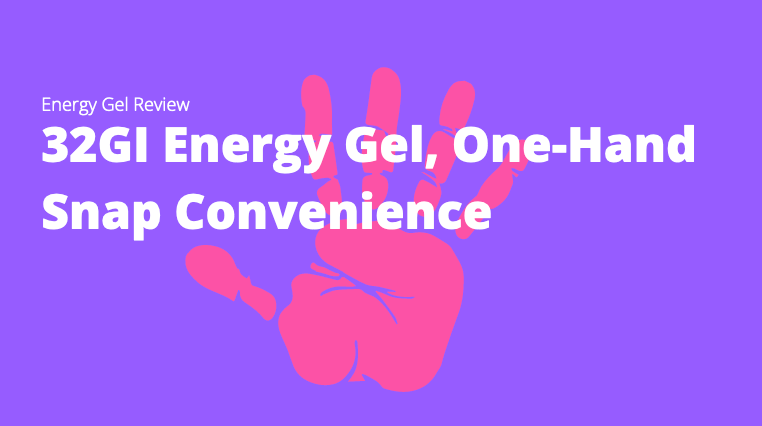 but in a revolutionary package

A single pack is 27g and provides:

Although the ingredient list is short, it contains a few chemical additives. I don’t eat energy gels for their great taste or health anyways, so artificial crap doesn’t bother me. Everything else looks pretty standard, but 84 calories per pack is at the lower end. I prefer my gels to be in the 100-calorie range.

Regarding taste and consistency, there are no surprises. If you’ve eaten gels before with no issue, you should be okay with 32GI’s flavor and texture.

The patented one-hand snap design is where 32GI gets an A plus plus! Its energy gels come in a flat packet the size of a credit card. Simply snap the package in half with only one hand to open up a crack at the center and suck. It’s simple and mess-free. For cyclists, the packaging is a godsend. No more “look ma, no hands” moments or struggling to tear open the gel with your teeth.

(If you like this kind of packaging, Enervit also has someting similar.)

Performance – gets the job done

Due to the one-handed claim, I had to test 32GI energy gels on a bike. I rode 40km on a mostly flat course and fueled with two 32GI energy gels – Raspberry and Passion Fruit flavors. Since it was not a long ride, I did not eat breakfast.

It was not the best-tasting gel I’ve had, but definitely not the worse. 32GI simply got the job done.

What truly won me over is the aforementioned packaging design. The flat packet fit nicely in the back pockets of my biking jersey and the smaller front pouches of my hydration vest. And as advertised, one hand is all I needed. Whipped it out, snapped, sucked, no fuss, no mess.

The more interesting technology is incorporated in its energy chews, which is part of the “Endure” category. Here’s what 32GI has to say about its Endure products.

“…designed for athletes who require stability to complement a steady and controlled pace effort during exercise…It is also highly complementary to the health and weight conscious athlete – in that the lower and steadier rise in blood sugar it provides allows for a higher rate of fat oxidation (fat burn) during exercise.”

Each bar is 50g and provides:

Isomaltulose is the secret sauce. Like sucrose, Isomaltulose is composed of glucose and fructose but is only half as sweet. Additionally, with a different enzymatic structure, metabolization in the small intestine and absorption into the bloodstream are slowed.

The bar comes in four blocks. In a product intro video, the company suggests tearing off a block and eating every 20-30 minutes, meaning a bar of chew should last 1-2 hours.

I was expecting a gummy treat, somewhere along the line of gummy bears or cola bottles. That wasn’t the case.

The chew was soft and easy to chew, which was good. However, I found it too sweet. The flavor wasn’t horrible, about the same as most gels in terms of palatability.

The main problem was that the chews required chewing, so they had to stay in my mouth and on my tongue for longer than a gel would need to, which exacerbated the sub-par taste.

The packaging reminded me of a Snickers Bar, about the same size and similar tear-open design. Bringing it on runs and hikes was no different than bringing an energy bar. It’s designed well.

I brought 32GI chews (2 x Peach) on a long training run along a local riverside park, a flat route. The goal of the run was to maintain an easy effort, the perfect way to test drive 32GI’s Endure products.

It’s challenging to make what are essentially sugar water and sugar jello tasty.

That’s why there are no tasty options, in my opinion, only relatively palatable ones. The fact that I had to chew the chews meant the sugary clumps had to stay in my mouth longer. I did not enjoy that. I much rather just “rip off the band-aid” and quickly slurp down a gel.

Ingredients include sugars both higher and lower on the glycemic index. In theory, it should provide an instant boost as well as a slower, steadier energy output.

I’m always a bit skeptical of scientific claims and promises by sports nutrition companies because I rarely feel any extraordinary effect. All I need is carbohydrates that are easily absorbed, don’t taste too horrible, and don’t cause digestive issues. As long as a fuel does these three things, it’s a viable option for me.

32GI energy chews did sustain me for the entire run, but there wasn’t a noticeable difference from other gels and chews I’ve had before. Unfortunately, the subpar taste and texture are a minuse for me. I don’t want to go as far as two thumbs down since taste is subjective, but I would give it zero thumbs up.

Here are some of our recent reviews. Have a read.

What is Maurten Hydrogel?

What is SiS Isotonic Energy Gels?