Ucan Edge energy gel is a 53 g gel with 70 calories of energy. The key energy source is 19 g of carbohydrates, specifically LIVSTEADY corn starch. It has zero fats and proteins, 55 mg of sodium, and provides 100% of recommended daily vitamin C intake. 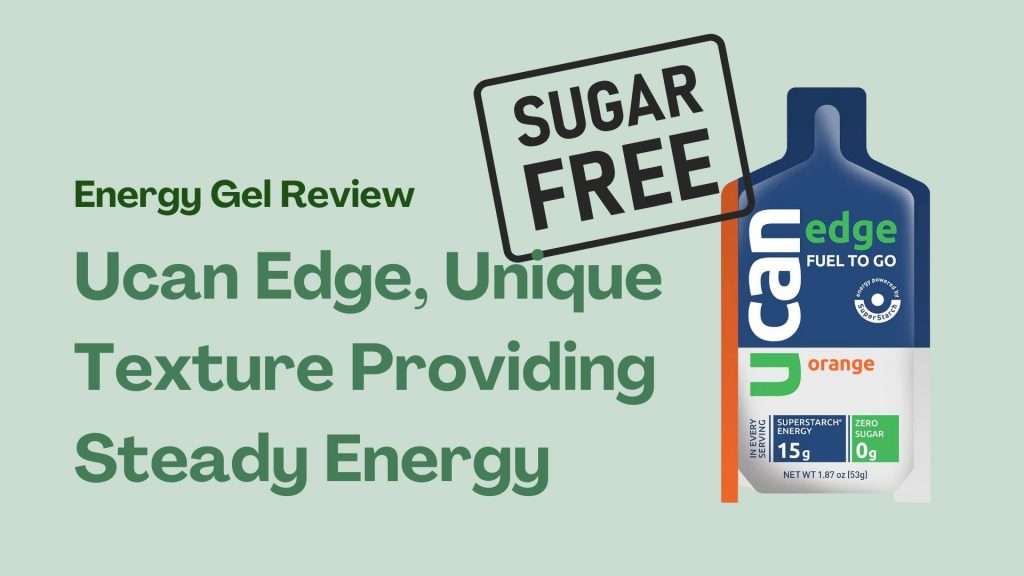 Runivore Tom and I are rarely in complete agreement regarding race fueling. We like to run different races, and he likes most energy gel flavors, while I believe there are no tasty gels, only palatable ones.

Well…Ucan Edge Energy Gels are something we can both get behind. Read his Ucan Edge energy gel review here.

With the popularity of the keto diet and fat as fuel concepts and more research on the adverse effects of sugar, Ucan has garnered interest among health-conscious athletes. Professional marathoners Sara Hall and Meb Keflezighi and distance runner Joe Klecker are some world-class athletes listed as Ucan users.

I fueled a 30km run at easy-to-moderate effort with two Ucan Edge energy gels. Below is my experience and what I’ve learned researching the brand.

“Ucan is here to help you finish your workout and day strong while fitting into your keto diet and lifestyle…powered by Livesteady – a unique, low glycemic, complex ingredient that delivers steady, long-lasting energy nutrition with no spikes and no crash,” the company claims.

The main ingredient of Ucan Edge is Livesteady, a corn-based complex carbohydrate. According to the company, in 2008, European scientists discovered a new way to process starches, which yielded a slow-digesting carbohydrate.

What are the ingredients of Ucan Edge? 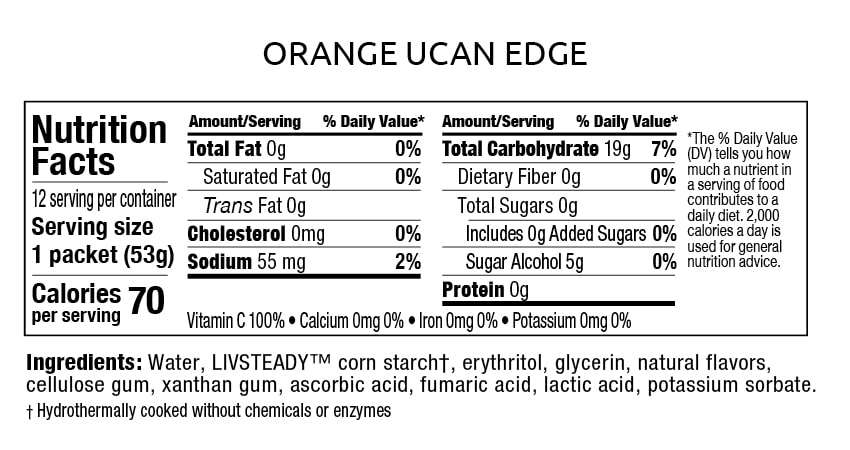 Erythritol also doesn’t raise blood sugar because humans don’t have the enzymes to process it. The sugar alcohol is absorbed into the bloodstream and then excreted unchanged through urine.

Ucan Edge is a 53 g gel with 70 calories of energy. The key energy source is 19 g of carbohydrates, specifically LIVSTEADY corn starch.

The energy gel has zero fats and proteins, 55 mg of sodium, and provides 100% of recommended daily vitamin C intake.

The package of Ucan Edge is big, about 11 cm in length. If you choose it as your race fuel, ensure the gels fit in your short pockets and race belts.

Due to the length of the sachet and the narrower neck where the rip is located, it was difficult to completely suck out the content. This could be an issue when running at a harder effort and maintaining a steady breathing rhythm is imperative.

Although I tested the orange-flavored version, the taste was an indistinct fruitiness. It wasn’t bad.

Texture-wise, it’s on the watery side but has a subtle gritty texture due to the use of Livesteady corn starch as an ingredient. It’s different but not unpleasant.

I took two Ucan Edge Orange energy gels on a 30km run at easy-to-moderate efforts (the last 4km at marathon pace). The entire workout was 2 hours and 48 minutes.

I began the run on an empty stomach and took the gels at the 1- and 2-hour marks.

In 2017-18, I experimented with a low-carb diet while training for my first 100-miler. I performed many fasted long runs and mostly avoided added sugar and starchy foods. Therefore, the nutritional concepts the company has incorporated into its products aren’t foreign to me.

Here are a few takeaways:

However, the orange-flavored Ucan Edge sustained me on a 30km run at easy-to-moderate efforts and on tired legs. I was expecting to really feel the cumulative fatigue of the training block, but my energy level was good throughout.

The flavor is palatable, with an indistinct fruitiness and a subtle starchy texture.

If your digestive system is sensitive to sugar spikes, or you are practicing a keto diet or have diabetic conditions, we strongly recommend you look into Ucan products.

This energy gel is Runivore approved.

Looking for racing fuel? Here are a few energy gels reviewed by us recently.