Ken Moriyasu, a RUNIVORE from Oregon, USA, just completed his first trail 50km. From an overweight 38-year-old to ultrarunner in 15 months, below is his story… 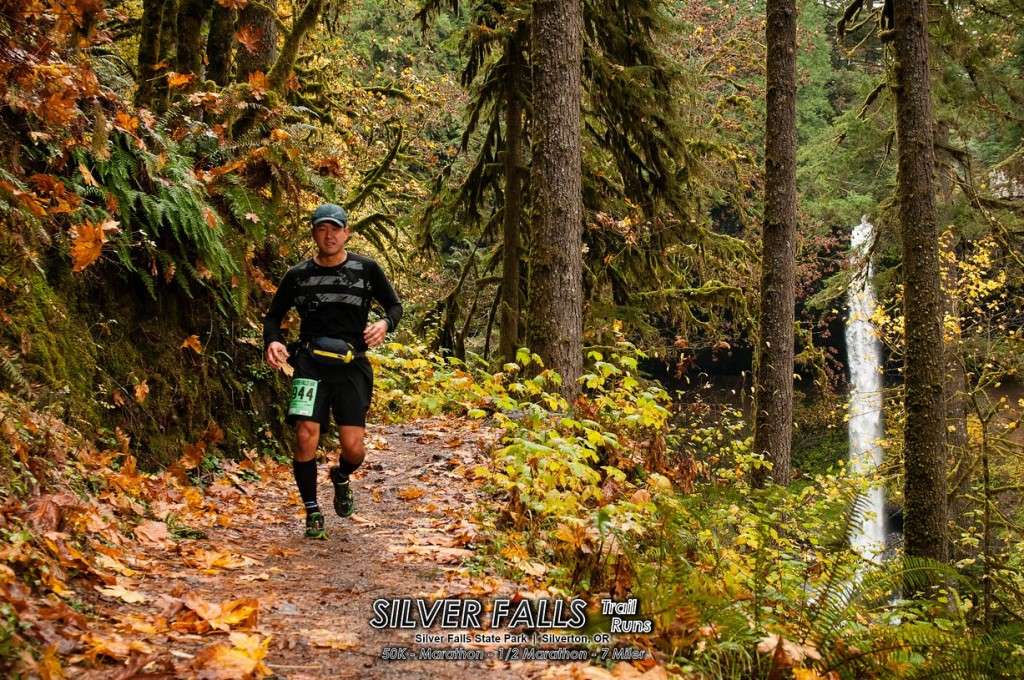 On November 7th of this year I ran my first ultra, the Silver Falls 50k in Silverton, Oregon, USA. RaceS day started at 4:00 AM pitch black and pregnant with promise, although I had actually woken up a few minutes prior to my alarm going off, and felt fairly well rested with the five and a half hours of sleep I had managed to get. I got dressed methodically, taking a mental inventory of how my various muscles and appendages felt. I had been tapering for about 10 days but had remained active by doing a combination of shorter, low intensity runs combined with moderate weight training, and felt fresh on race day. I packed a breakfast consisting of a peanut butter and agave syrup sandwich on whole wheat bread; a banana, and Red Bull energy drink, and headed out the door.

I started running regularly as an adult in the summer of 2014 at age 38, about 15 months before my first 50k race chronicled here. Although I wasn’t in terrible shape at that time, I was definitely overweight and not feeling good both physically and mentally on a day-to-day basis. I felt like a change was in order, but I wasn’t quite sure what.

After several timely conversations with friends about running I decided to give it a try, and I fondly refer to this as my midlife crisis. I remember walking into the running store with trepidation to buy my first pair of running shoes in nearly 20 years, thinking would I even know what to do with them? I took them to the Duniway track in downtown Portland for a test run, and nearly had a heart attack cranking out three 9-minute miles on the rubberized surface there. It was a rough start, but I felt like I was on the way to once again becoming a runner.

Flashback to 20 years in the past – Once upon a time, in a galaxy far, far away, I was a sprinter at a small high school in Oregon posting decent times in the shorter distances. But while I excelled at those short races as a youth, as an adult I am learning that life is a lot more like an ultramarathon than it is a 100-meter dash.

We arrived at Silver Falls State Park a little under an hour before the start of the race. The sun was just slowly making its way over the top of the evergreen forest surrounding the park, and the outside temperature was still a chilly 39 degrees F (4 degrees C). I stepped outside to check in for the race and immediately regretted my decision not to bring long pants – by the time the race started my calves and feet felt mostly numb and would remain in that state for the first couple of miles.

The race started off in a generally benign fashion; I was running at an easy pace trying to get warmed up and restore feeling to my extremities while chatting with my buddies Andrew and Matthew. This being our first ultra, Andrew and I simply wanted to finish the race in one piece while Matthew, being a veteran of several 50k and 50 mile races, was aiming for a PR (which he managed to do). Matthew soon pulled ahead of us while me and Andrew kept running at an easy pace toward the back of the pack, content with our 11-minute miles over the flat road at the start.

We soon entered single-track trail as the route took us into the forest. Various types of yellow, orange, and brown maple leaves blanketed the ground beneath our feet providing a soft and somewhat slick running surface. I maintained my easy pace while checking my heart rate, running the flats and downhill sections and mostly hiking the uphill stretches that took us meandering through the park. There were aid stations every few miles, where I stopped to refill water and electrolytes as well as stuff my face with various snacks ranging from gels, granola bars, bananas, cookies, potato chips, to boiled potatoes with salt. I was drinking water, eating, popping salt capsules, running easy and feeling good: at roughly the halfway point I checked my watch and I was at 2 hours 55 minutes. Shoot, I thought, even with the toughest sections coming up in the second half, I could probably finish in under 6 and a half hours.

At around mile 16 (25 km) I noticed my quads tightening up – no big deal I thought; I would just drink some water and take some more salt and it would be fine. Not so. The cramping started shortly thereafter, and would become enough of a problem that I had to stop regularly and walk many of the sections that I normally could have run. I hobbled into the aid station at mile 19 (30 km) looking like the Tin Man from Wizard of Oz and proceeded to gobble up every potato chip and electrolyte drink in sight. I felt somewhat better and headed out a few minutes later feeling revitalized, but that feeling would not last long.

The next 9-mile (15 km) section of trail was one of the toughest I have ever run. After my initial burst of energy the cramps returned in all of their agonizing glory, and even though much of the forested, single track trail was downhill I could not make up much time due to the slow pace I was forced to “run.” I passed beautiful waterfalls and creeks which helped a little in easing the physical and mental anguish I was experiencing, but it was impossible to escape the reality of having to run these last miles on completely dead legs, with searing pain coming with each plodding step I took along the trail.

I’ve heard that nobody runs ultras because they are easy. I agree, which begs the question of why do we run ultras at all? Non-runners will laugh dismissively and call us crazy and masochistic, but I feel like there is more to it than that.

These were some of the thoughts that went through my mind as I stumbled through those final miles of the race: I thought of the relative comfort and ease of my daily life – waking up in a soft bed in a warm house, having hot water with which to shower, a car to take me to my comfy heated/air conditioned office where I spend the majority of my waking hours, the training runs where I run somewhat hard but without nearly the exertion I was putting forth now. And here I was mostly alone in the middle of the forest running in the pouring rain, pain ravaging my legs while attempting to run a ridiculous distance of 50 kilometers, and for what?

In these moments I questioned my reasons, my decisions, and my sanity; but when I got past these feelings of self-doubt I realized a different type of reality: one where I felt more connected with people close to me. I thought of family members and friends who have experienced prolonged physical suffering for various reasons– and in those moments their pain become much more real to me. Is it possible then that my capacity for empathy toward others was expanded through ultrarunning?

As running is, at its core, an exercise in self-absorption I inevitably thought of my own situation along these same lines. Why was I subjecting myself to this? Why did I need to push my limits to a place of utter discomfort and mind-numbing pain? I looked back and reflect on a multitude of memories from early childhood to the present. And then I cried, and it felt good: I was letting go.

I caught up to my friend Andrew shortly before the last aid station at mile 28 (45 km). We were both in bad shape: dejected, physically and mentally wasted, and chilled to the bone; holding onto the handrail along the edge of the trail to support our weary legs and beaten down psyches.

As I approached him we exchanged knowing glances and words going through the same experience during those precious moments. We tried to encourage each other despite the circumstances and hobbled up the hill to the last aid station. I took a long break there gathering and centering myself, putting down several cups of Coca Cola and beer. I headed down the 3-mile home stretch, still with more questions than answers on my mind but feeling good that I had gone to a place that put me back in touch with myself, and what I believe to be most important in my life. And after all, isn’t that why we run ultras?