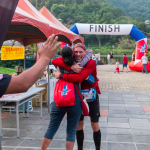 He hails from Belgium, discovered love for endurance racing in the mountains of Taiwan, and more recently has become known as “Triathlon Beast” while working and training in Singapore. We’re inspired by his story of being an ordinary dude who transformed into a badass triathlete and ultrarunner. We also love his motto:

Set a Goal so Big that You can’t Achieve it, Until You Grow into the Person Who Can

Here’s his story in his own words:

My journey as an endurance athlete is one about inspiration. It all started when I moved to Taiwan in 2013. I was inspired when I saw elderly & physically disabled people running up mountain and jungle trails. I remember thinking to myself “one day I want to be able to do that”. Those people became close friends and turned my life around. My social and training life became one. I completed my first 17km trail run race at age 34. Within a year, I completed my first 50km ultra-distance race. That same year, I completed my first OD triathlon. I was hooked. Come end 2016, while based in Singapore, I decided to take triathlon to a competitive level under the guidance of COS Coaching. Throughout this journey I have been lucky to be inspired countless times. My aim is to pass it forward: To inspire others as I’ve been inspired – by achieving aggressive personal goals, living a healthy lifestyle and coaching others to believe in, and ultimately, achieve their athletic goals.

And his recent achievements: