I’ve run ultramarathon races fueled almost entirely by bananas and I’ve run my best marathons fueled entirely by gels. A little disclosure: I’m not a professional athlete, but I’ve got four 100k ultra marathons, alongside a dozen other ultras, and over 50 marathons under my belt. At the time of this writing my marathon PB is 3:43 (but I’m aiming for a 3:30) and my best 100k trail race time is over 13 hours.

In my opinion bananas are a great source of fuel for long and grueling ultramarathon races but they need to be supplemented by additional salt and other real food sources, while energy gels are the best stand alone fuel source for long but fast races like marathons and 21k races. In this article we’ll compare the two fueling strategies and summarize some of the key differences. 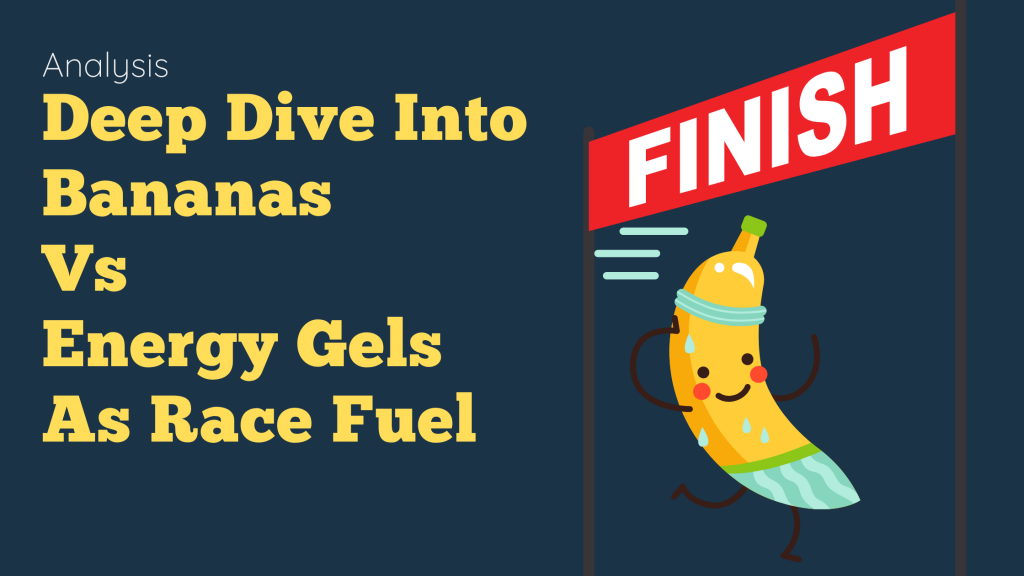 When you should consider bananas as racing fuel

Let’s start with the obvious, you should not consider bananas as a racing fuel unless it will actually be provided by the race organizer at the checkpoints. Otherwise, you’ll be lining up at the start line with 4 bananas stuffed in your racing shorts (about a pound of bananas), just to replace the energy you could get from 4 energy gels (120g). You can usually check the race website of bigger events and see what will be provided at the checkpoints and the distance between the checkpoints.

You can take a look at the USDA FoodData Central to get a complete picture of the nutrients contained in bananas. For our purpose we will be looking at the key ingredients that sports and nutrition scientists have determined are necessary in today’s energy gels. Specifically we’ll take a look at the types and quantities of carbohydrates and electrolytes in bananas.

Carbohydrate profile and caloric density in bananas vs. energy gels

An average medium (almost 7 inches or 17cm) banana weighs about 110g. Here are some key facts about the carbs in our banana:

Bananas are the kings of potassium but they lack the adequate amount of sodium when compared to energy gels. Here’s the breakdown:

An aside from an obvious banana shill – the Chiquita Banana people

While researching bananas as a race fuel for this article I ran into some propaganda which I think is worth sharing from the banana-lover at Chiquita Banana. They point out the following tidbit which is worth sharing:

bananas are rich in vitamin B6, which helps to convert carbohydrates into usable energy. Running is an aerobic sport, so having a good source of easily accessible energy to eat before a run is important. And don’t forget that a banana will help to maintain the same glucose levels as a sports drink!

Some energy gels, like Honey Stinger also contain vitamin B6, so it seems that sports nutritionist at these well established companies agree.

Bananas are awesome, and they are one of nature’s best sources of energy, almost seemingly engineered for us endurance athletes. They can definitely be part of a fueling strategy when doing super long (and slower) endurance events, ones where you will also have a chance to supplement them with salt and more calorie dense foods. For marathons and other fast endurance events, we recommend you stick to energy gels for optimum outcomes.